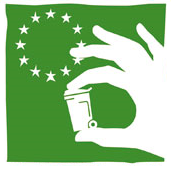 In the European Week for Waste Reduction, 130 Repair Cafés in the Netherlands, Belgium, Germany and France will invest in a cleaner environment. Their aim for that week, which lasts from 22 to 30 November, is to prevent a total of more than 3,200 kg of waste.

The European Week for Waste Reduction will be organised for the fifth year in succession, with support of the European Commission. In the first year, in 2010, seventeen countries participated, and now 27 countries. All of them will aim to produce less waste, increase reuse and the use of recycled products, with national, regional and local events.

In fact, for the Repair Cafés volunteers it is the week like any other. They will repair numerous appliances and other broken objects: things that would otherwise probably have been thrown away.

In the Week for Waste Reduction you can visit at least 130 Repair Cafés in the Netherlands, Belgium, Germany and France. A few happened to be open this week anyway, while other Repair Café groups are organising an extra repair meeting in this week.

More than 3,200 repairs
Past experiences have shown that a Repair Café meeting carries out an average of 35 repairs, of which 25 are successful. That means that we expect that during the 130 Dutch, Belgian, German and French Repair Cafés meetings in the Week for Waste Reduction about 3,250 broken objects will be repaired. If an object weighs an average of 1 kg, then this collective activity could prevent 3,200 kg of waste.

“This is good news”, says Martine Postma, of Stichting Repair Café. “That way we all contribute to reducing waste together. And repairs in het Repair Café are also fun; that’s an extra gain!”

=> On the map on our homepage you can discover if there is a Repair Café open in your neighbourhood during the European Week for Waste Reduction!