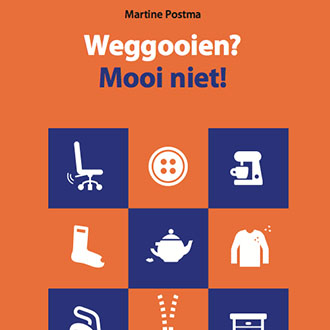 The Repair Café Foundation celebrates its fifth anniversary this month! A lot has been achieved in that time: you can now bring broken items to more than 700 Repair Cafés all over the world. Now there is also a book about this successful phenomenon. On 15 March, creator Martine Postma presented her commemorative book ‘Weggooien? Mooi niet!’ (i.e. Toss it? No way!)

“The very first Repair Café in the world took place on 18 October 2009, in Amsterdam-West. It was a day I’ll never forget”, writes Martine Postma in her book. “I had never had so many positive talks on one day about a subject I find so important: repairing instead of throwing away.”

Already in 17 countries
In January 2011, the foundation began a project to spread the Repair Café all over the Netherlands. After the first year, the country had twenty local functioning Repair Cafés, by the end of 2012 there were 53 and the Repair Café was also finding a foothold abroad. Since then Repair Cafés have been established in seventeen countries, under which, besides the Netherlands, Germany, Belgium and France also Chile, Brazil and even Australia.

It appears that Repair Cafés are not only good for the environment, but also for the contact between neighbours. Volunteers and visitors can enjoy the relaxed atmosphere, exchange ideas and chat. Some volunteers have flourished! In the commemorative book they tell their story.

The book is momentarily only available in the Netherlands and Belgium. Hopefully there will be an English, German and French translation soon!

Repairable products
What are the Repair Café Foundation’s plans for the next five years? “We will, of course, continue to spread the Repair Café”, says director Martine Postma. “In addition, we are going to increase our efforts for better repairable goods. Things should again be made for repair, not to be discarded and replaced. This is one of our priorities for the coming period.”