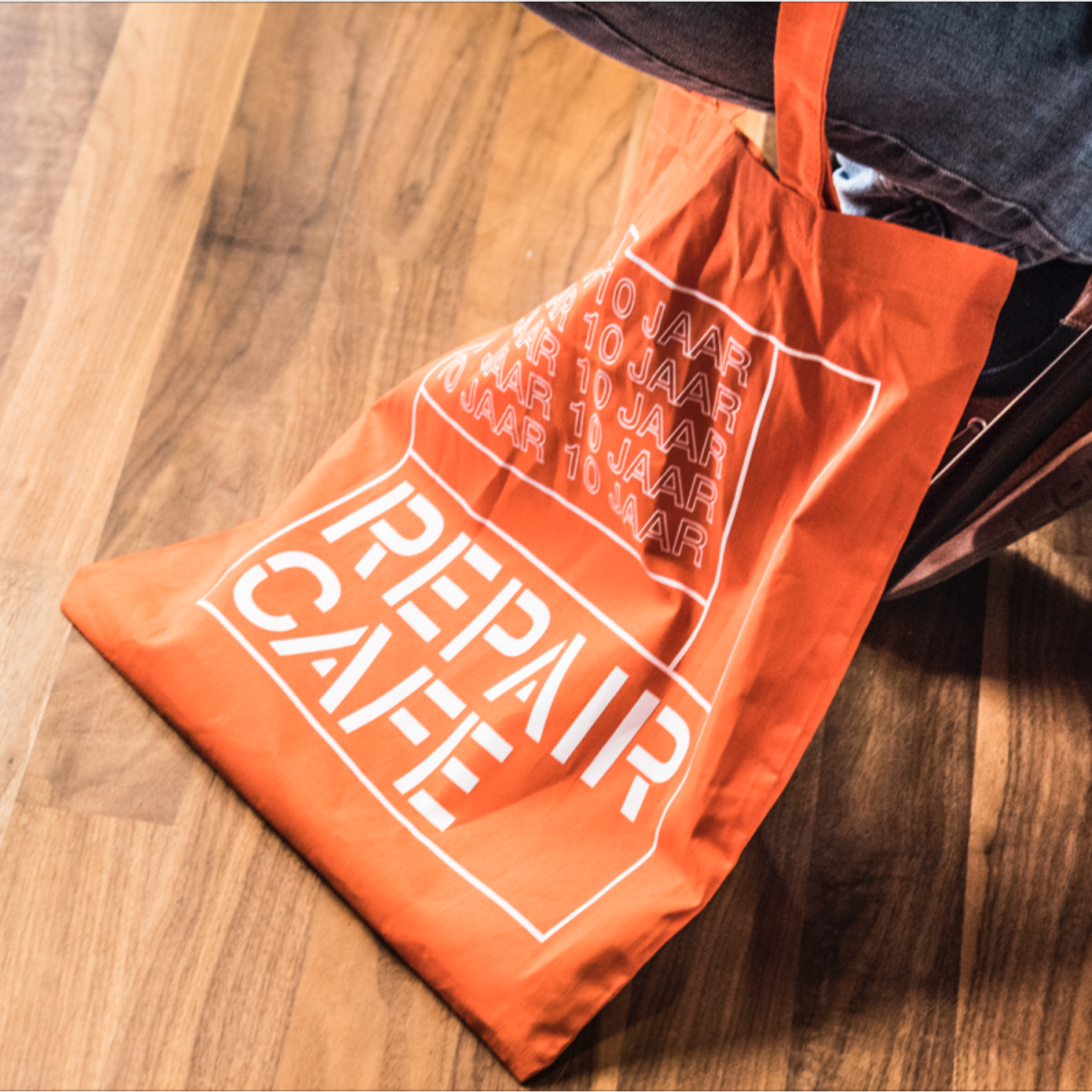 The anniversary symposium Celebrating Repair was a great success. With this well-attended event at the Amsterdam Public Library at Friday October 18 the ten-year anniversary of Repair Café was celebrated.

The hundreds of visitors experienced a very diverse programme. Keynote-speaker Tine de Moor placed Repair Café in a broad perspective. She demonstrated how well the initiative corresponds with the current mentality.

Knowledge that is in your hands
“Three quarters of the population already have the mindset to want to repair things: these people only need to be handed the right instruments. Repair Café is one of those instruments”, the professor at Utrecht University stated. She acclaimed the ‘experiential knowledge’ – “knowledge that is in your hands” – in which the Repair Cafés are so rich. 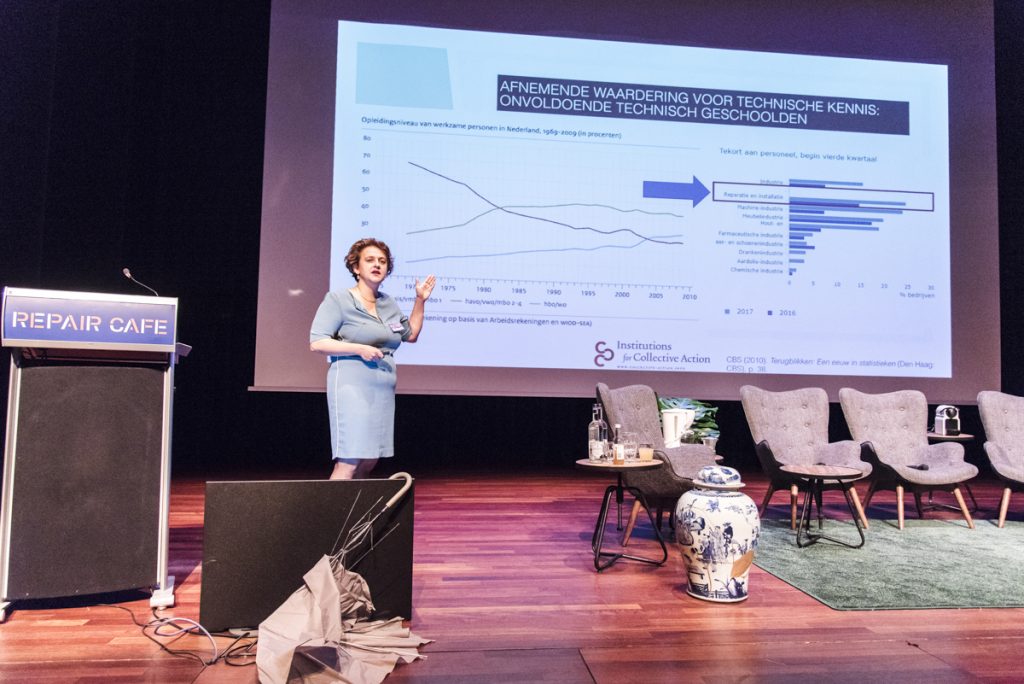 Senseo versus Nespresso
After the inspiring keynote, Repair Café repairers had a conversation with product manufacturer Philips for the very first time. Director of sustainability Eelco Smit listened to the tips of repairers Piet van der Zanden (Repair Café Ridderkerk, the Netherlands) and Frans Snijders Blok (Repair Café Bussum, the Netherlands) concerning changes in the design of Senseo – the product that is brought in most frequently in Dutch Repair Cafés. Frans did mention that the Senseo is a very repairable product, especially compared to the Nespresso machine which he has been seeing more and more often in his Repair Café over the last years. 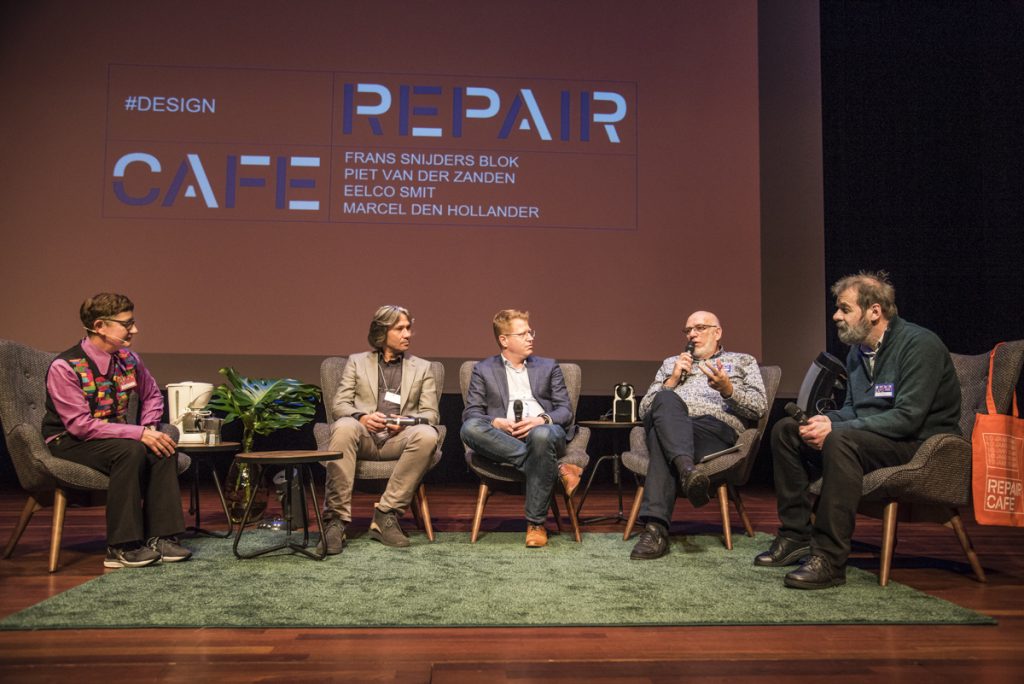 Eelco Smit (middle) promised to relay the suggestions of Piet van der Zanden (second of right) to the product designers at Philips. 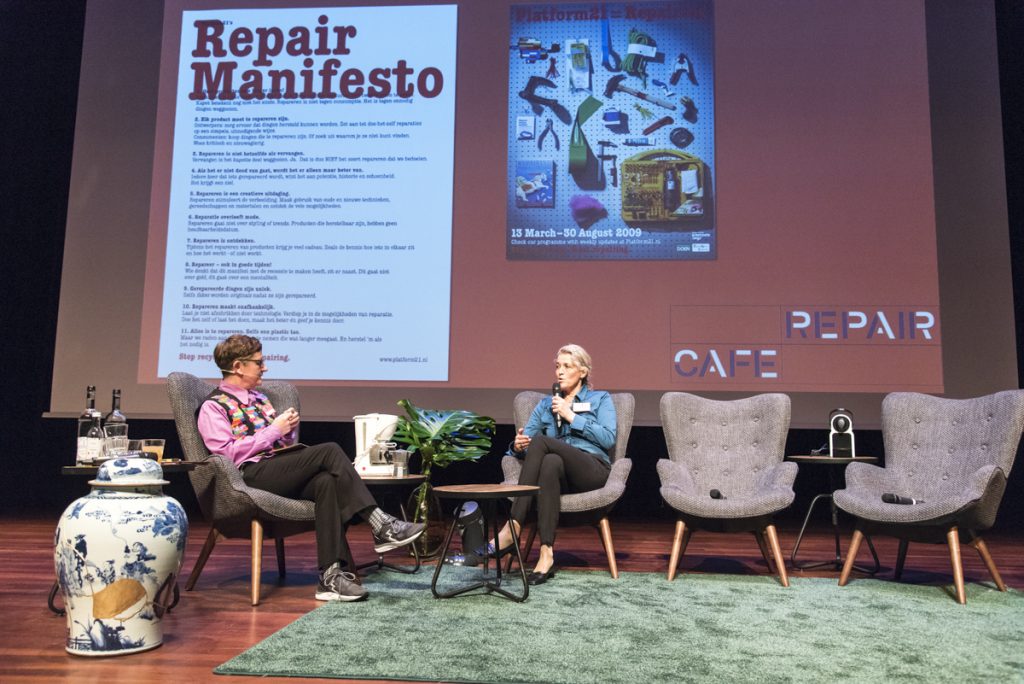 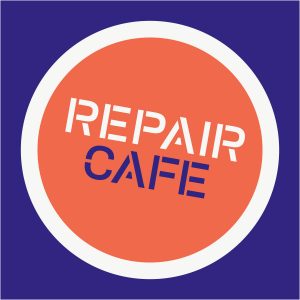 Its components offer more option for users to create items like posters and flyers by themselves, and to vary in layout and use of colour. “The new house style offers more freedom and more choice”, Martine explained.

A hundred grand subsidy for Repair Café International Foundation
There was also political news. Dutch Member of Parliament Carla Dik-Faber (of the ChristenUnie party) said that she submitted an amendment to the budget of the Ministry of Infrastructure and Water Management. According to that amendment Repair Café International Foundation will receive a subsidy worth a hundred grand from the government for carrying out her core tasks. “A present for Repair Café’s ten-year anniversary”, the member of parliament said. Her effort is for the subsidy not be allocated once, but on a yearly basis. 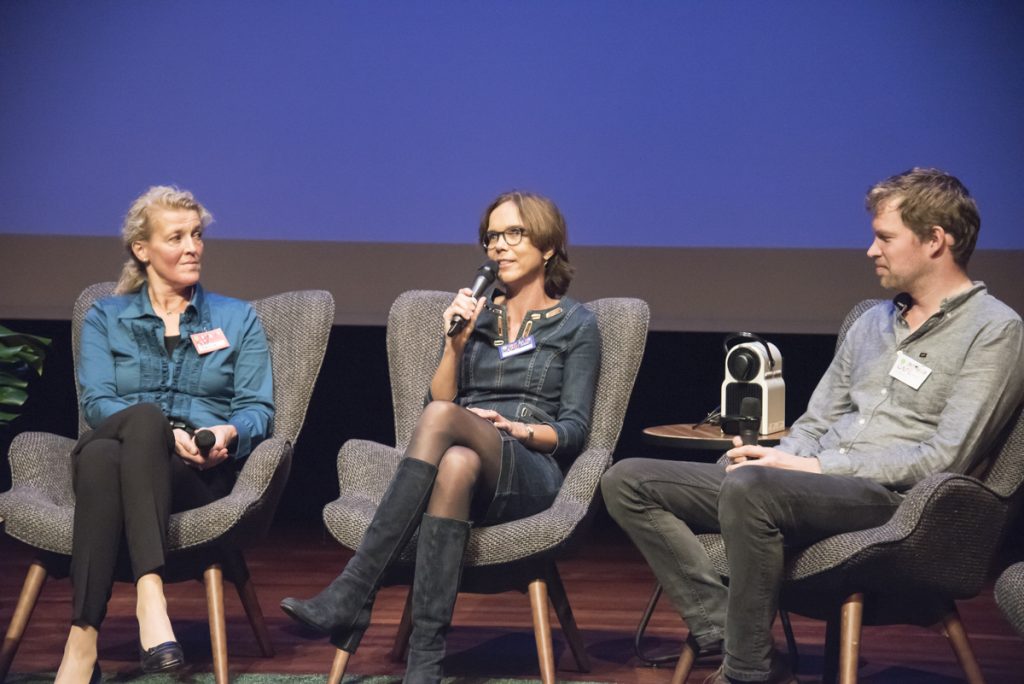 Martine Postma called this fantastic news, but also mentioned the necessity for it. “At this moment, we do not have structural sources of income”, she said. “Whereas we do contribute to shaping the Circular Economy – which is government policy. It is good to receive a governmental contribution for that.”

News forms of collaboration
At the end of the morning, new forms of collaboration to anchor repair even better in daily life were discussed. Flemish Rosalie Heens talked about the connections that Repair Cafés in Ghent make with other initiatives. Sjaak Langenberg discussed his art project concerning making and repairing in health care. Esther Slegh (Goeree-Overflakkee, the Netherlands) and Annie van Genugten (Uden, the Netherlands) addressed the new concept of Circular Craft Centers, in which thrift stores, recycling centers and Repair Cafés work together.

DIY repairing: smartphones, umbrellas…
After lunch, everyone could roll up their sleeves. There were workshops, presentations and demonstrations. Visitors could, for example, learn how to repair their smartphones with the help of iFixit. They could also fix a broken umbrella and make their own reusable bread bag. Students of the Rietveld Academy displayed new materials in their REPAIRLAB. Visitors could write down their personal action points for a repair culture in their own Repair Manifesto. Numerous artists, designers and researchers presented their works. 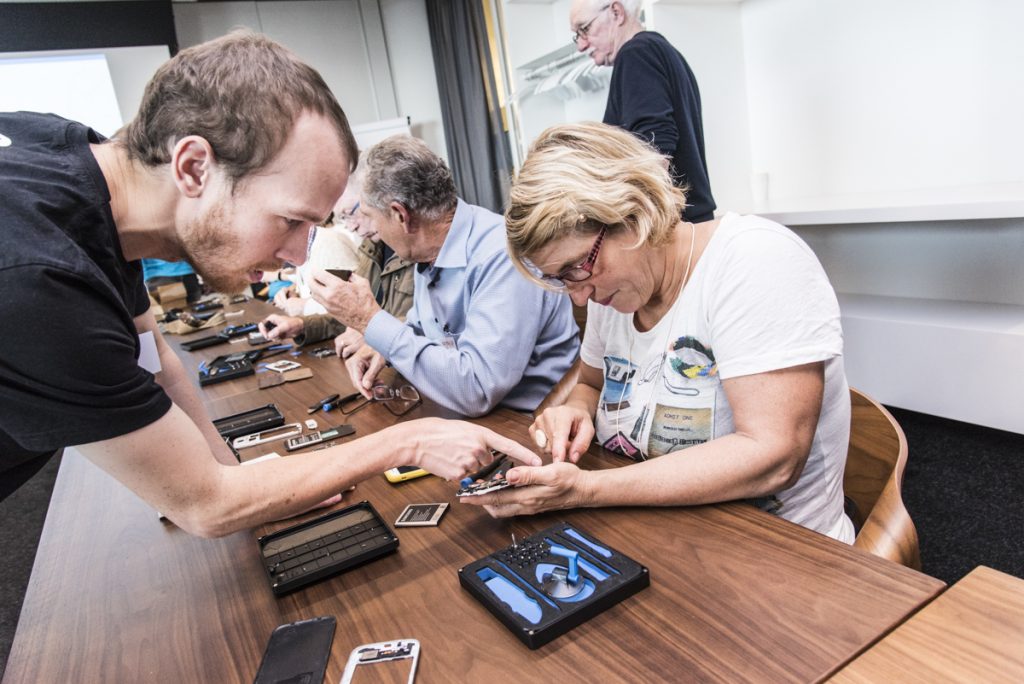 Jasper Fleischhauer (left) of iFixit knows everything about smartphone repairs. 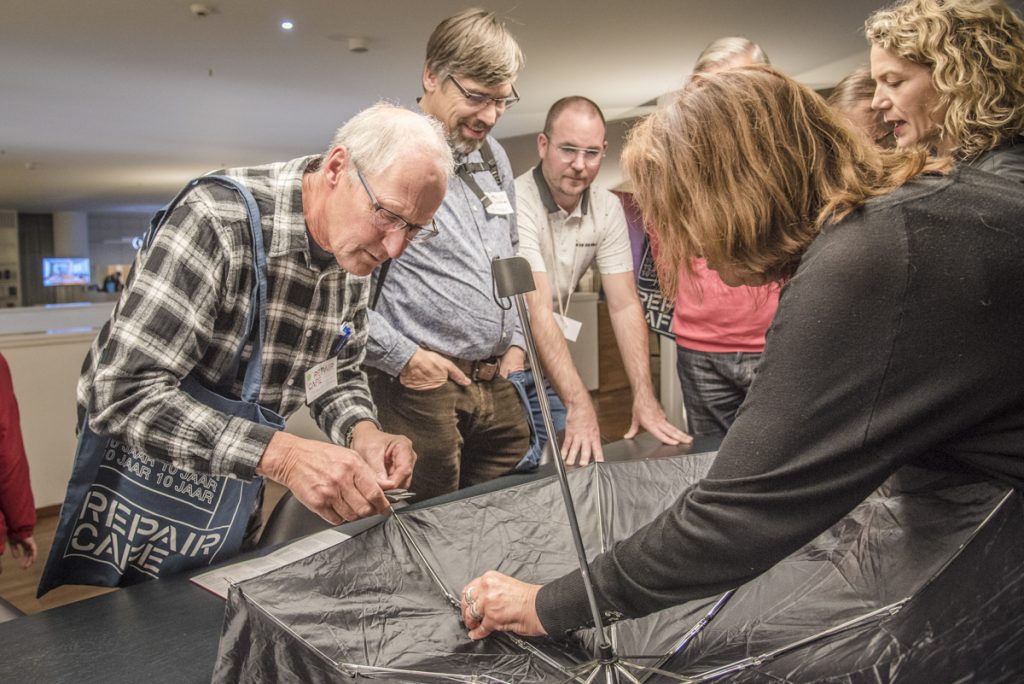 Artist Julia Mandle was taught how to fix umbrellas by an umbrella repairer in Paris. 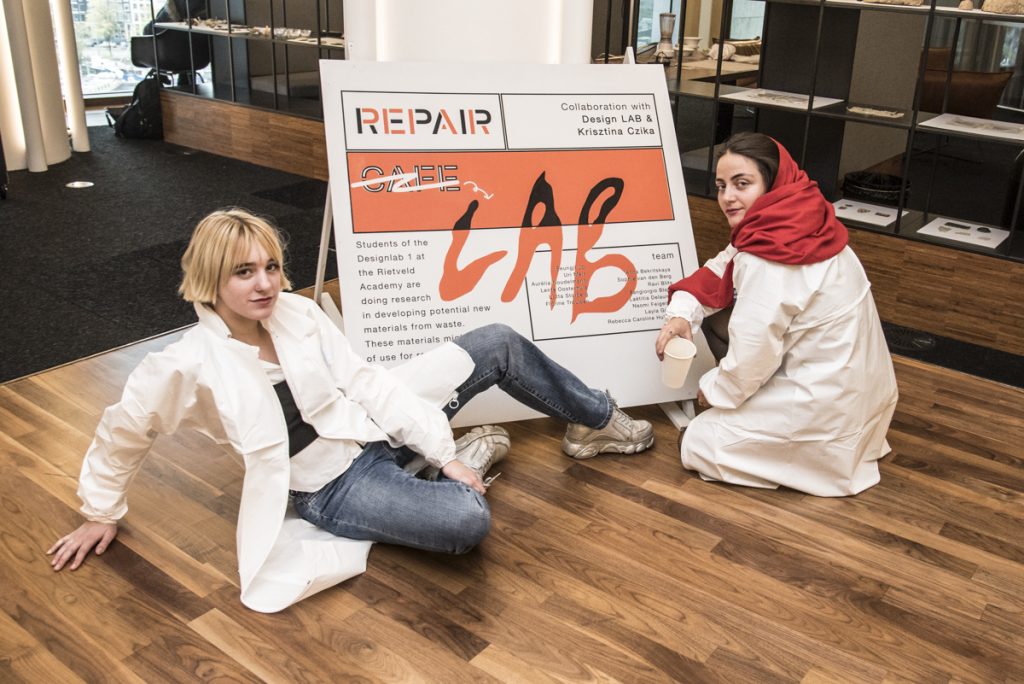 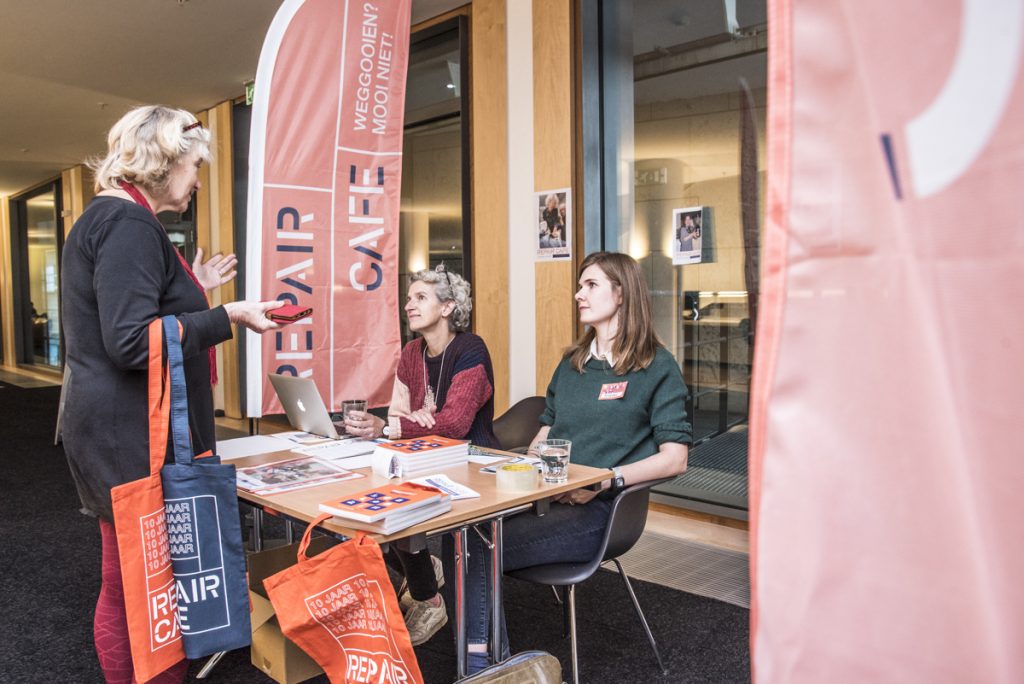 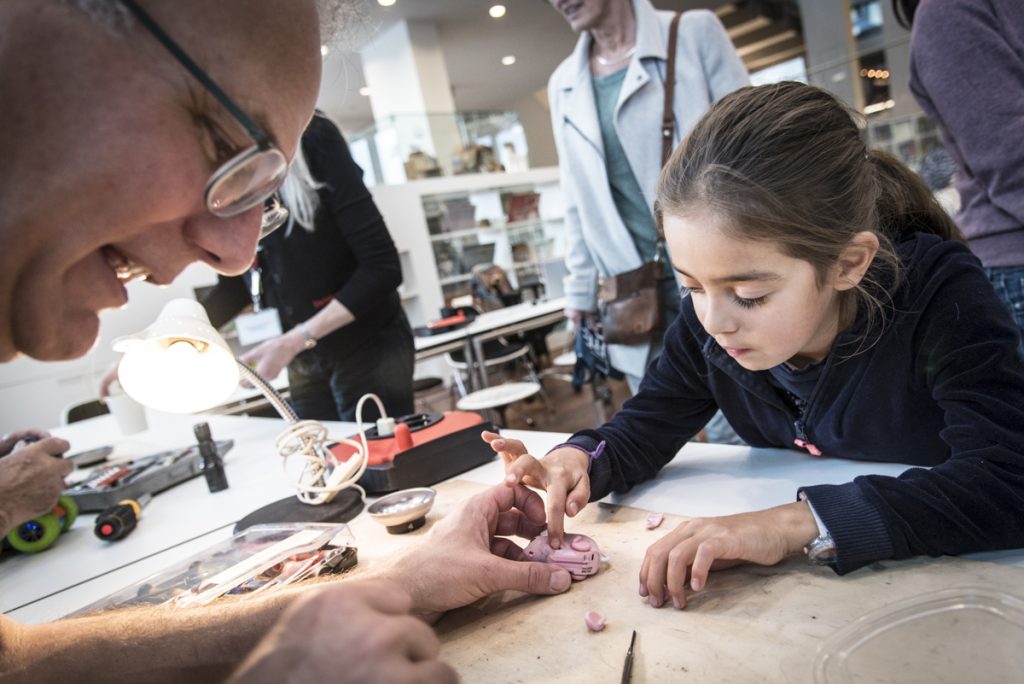 At the youth department in the library visitors could visit the Kids Repair Café.

MOOI STUK! Ode to the repair
The festive day ended with the opening of the exhibition ‘MOOI STUK! Ode to the repair’. ‘Mooi stuk’ has a double meaning: ‘stuk’ means ‘broken’, but ‘mooi stuk!’ also means ‘nice item!’. In this unique exhibition, repaired items are displayed like museum pieces. The idea of the exhibition was conceived by Joanna van der Zanden, who created the entire anniversary programme together with Martine Postma. The five pieces and repair stories will be travelling to multiple libraries in the Netherlands in the coming year. 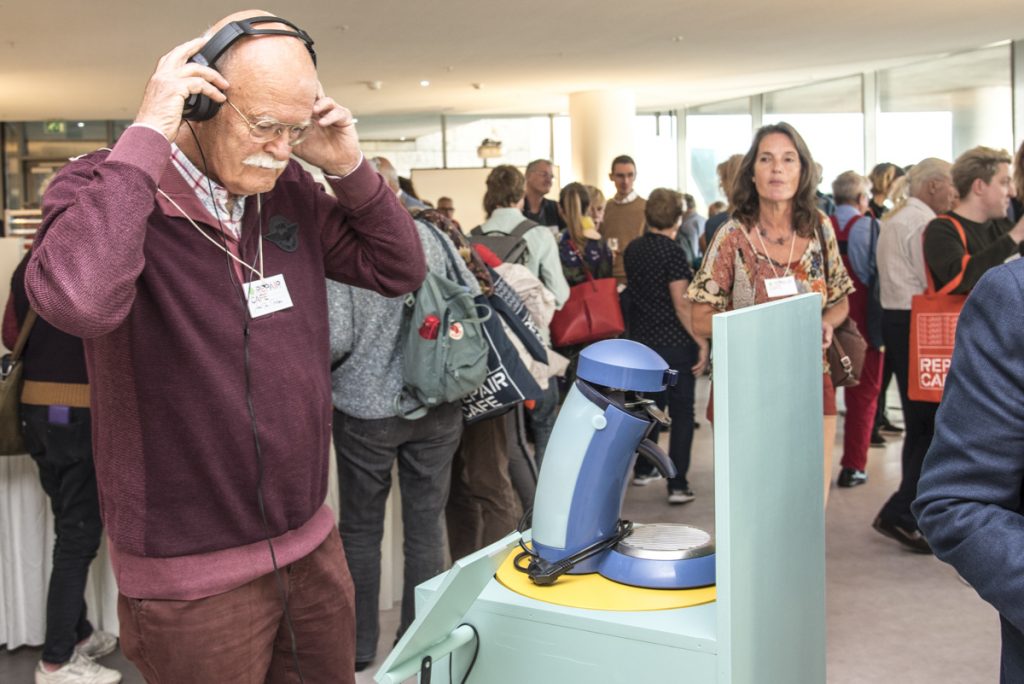 While you are looking at the repaired item, you can listen to the vision of the repairer.
All pictures on this page: Martin Waalboer/Repair Café International Foundation